Could hemp baby greens be the next must-have superfood heading for consumers’ salad bowls?

Researchers around the country are studying the viability of another potential revenue stream for producers, beyond the grain, fiber and flower crops for which the hemp plant has become most closely associated.

Hemp baby greens are being grown and taste-tested as a potential new high-value, niche leafy greens crop to add to the consumer’s plate.

But the legality of hemp baby greens as a crop is unclear. While hempseed and grain foods have been deemed generally recognized as safe by the U.S. Food and Drug Administration, there is still no legal precedent set under the U.S. Department of Agriculture’s interim final rule for hemp production for the plant to be produced and marketed as a leafy green yet, according to Robert Masson, an agriculture extension agent with the University of Arizona’s Yuma County Extension.

In the “winter salad bowl” produce-growing region in California-bordering Yuma, Arizona, where 90% of the nation’s leafy greens are produced in the winter months, consumers lined up to taste-test hemp baby greens and determine whether they may be added to the bagged salads the region produces for national distribution.

Arizona is the No. 2 producer of lettuce in the U.S., after California, and most of the produce that’s grown in Arizona is farmed in Yuma County. 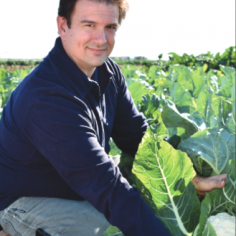 “We have the cropping system for it; we have … mechanical harvesters that can harvest it; we have coolers and we have shipping infrastructure to feed the nation with leafy greens, lettuce, romaine lettuce, iceberg lettuce,” Masson told Hemp Industry Daily. “That’s our cash crop here.”

Masson planted 17 different grain and fiber hemp varieties in the Yuma trial fields, maintaining the crop for 18 days before the hemp leafy greens were harvested.

Hemp baby greens “grows like a weed,” Masson said. The crop was grown to the three-leaf stage and even flowered, which helped neutralize some of the bitter taste of the leaf.

Hemp baby greens may also offer a high nutritional value, though research in this area is ongoing.

“When you eat it, it’s very dense,” Masson said of the hemp baby greens “You can feel the fiber moving through you; even though it’s nice and tender, it still has a lot of fiber to it.”

Out of 17 varieties, five were found to have the best taste qualities, based on a taste test conducted by 89 volunteers.

The five greens were sampled along with common leafy greens like romaine, kale and baby-leaf spinach for comparison. Another sample was made into a hemp-greens pesto.

According to Masson, consumers liked the hemp baby greens, reporting minty and fruity flavors, with floral influences, while hemp’s crispness was rated similar to kale, and consumers said hemp had more “peach fuzz” than other greens.

In overall likeability, greens like romaine and spinach rated higher than hemp, but on a scale of 1 to 5, hemp rated right in the middle at a 3.3. Consumers liked hemp better than kale, Masson said.

Meanwhile, some growers in the region are excited about the prospect of a new leafy greens crop. Farmers in the area steered clear of growing hemp for CBD, seeing it as a potential “boom-bust” similar to jojoba, Masson said.

“Most of the farmers here are very conservative and so they’ve been neutral about (hemp baby greens); however, there’s been a couple of very large farmers and solid processing centers that really want to do it,” Masson said.

Based on early trials, hemp baby greens appear to have a good shelf-life, and nearby Yuma lettuce processing facilities are running their own tests on post-harvest freshness and quality, he said.

“They’re all very tight-lipped because they know that if, if this turns into something big, they need to do their homework now and not tell anyone so when it becomes legal, they can just drop it and go,” Masson said. “But what I’m hearing is that it’s doing very well for shelf life.”

Hemp baby greens in Masson’s trials germinated faster than baby-leaf spinach, which is densely planted at some 3 million seeds per acre.

At that density, hemp producers could be concerned that baby-greens producers would compete for seed supply. That’s a serious consideration for a crop with relatively pricey seeds.

Henry Huntington, president and CEO of lef Farms, a greenhouse leafy-greens producer in Loudon, New Hampshire, said the high cost of hempseed could affect the plant’s viability as a profitable baby green.

“Baby greens are so young that it takes a lot of seed to produce a pound of greens; since it is a one-time crop, seed cost is a significant consideration,” Huntington told Hemp Industry Daily.

But Masson said he is working with local seed producers to build up the inventory. Based on trials and consumer reaction, Masson predicts hemp baby greens will be an iconic crop that will sell like “straight fire.”

“Most vegetables are just fashion – it’s the spring dress that you have to sell in spring – it can’t last to the fall because nobody’s going to buy it and it’ll go bad,” Masson said.

Masson said the University of Arizona study was inspired by a two-year study at Cornell University led by horticulture graduate student Renyun Mi that looks at the production requirements and sensory qualities of the novel crop.

Cornell University’s Controlled Environment Agriculture division is studying new and novel crops that can be produced in indoor environments, according to horticultural trade publication Greenhouse Grower.

In a series of experiments by Mi and a team of fellow Cornell researchers, hemp seeds were planted in plastic seedling flats and harvested 13 to 18 days after sowing, when stems are less fibrous and leaves are tender.

The Cornell team used cultivars from hemp grain and fiber varieties and ran trials for:

According to the Cornell panel, hemp baby greens had a “relatively mild taste, with unique fruity and floral flavors, and a soft, slightly fuzzy texture.”

The Cornell research team noted that there is need for additional research, breeding, cultivar selection and cultural management techniques to fully optimize this novel crop.

One of the objectives of Mi’s work was to develop a standard protocol to optimize yield and quality of baby leaf hemp production, including cultivar screening, sowing density and seed size. The study was published on the Basel, Switzerland-based, peer-reviewed academic publishing index, MDPI.

The potential crop is so new that many indoor leafy-greens producers haven’t even had time to consider it yet. Huntington, the New Hampshire greens producer, said another concern for production in a greenhouse environment is humidity. He noted that cannabis growers often struggle with powdery mildew.

“Our baby greens grow so fast, they transpire like little fog machines,” Huntington said. “I would worry about compatibility.”

If adopted for food production, hemp baby greens would be subject to the same food safety rules and traceability standards developed under the 2011 Food Safety Modernization Act.

The leaf- greens industry has been subject to wide scrutiny in recent years, following widescale recalls of romaine lettuce and spinach after E. coli foodborne illnesses were linked to lettuces originating from Yuma County in Arizona and in the Central Valley of California.

The leafy greens segment of the produce industry has developed a full-scale effort to focus on food safety under the California-based Leafy Greens Marketing Agreement, which producers must join if they want to have any hope of selling leafy greens crops, according to Masson.

Last month, the U.S. Food and Drug Administration announced the launch of a multi-year food safety improvement study that aims to enhance understanding of the ecology of human pathogens in the environment that may cause foodborne illness outbreaks.